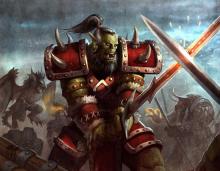 For as long as war has raged, heroes from every race have aimed to master the art of battle. Warriors combine strength, leadership, and a vast knowledge of arms and armor to wreak havoc in glorious combat. Some protect from the front lines with shields, locking down enemies while allies support the warrior from behind with spell and bow. Others forgo the shield and unleash their rage at the closest threat with a variety of deadly weapons.

Warriors equip themselves carefully for combat and engage their enemies head-on, letting attacks glance off their heavy armor. They use diverse combat tactics and a wide variety of weapon types to protect their more vulnerable allies. Warriors must carefully master their rage – the power behind their strongest attacks – in order to maximize their effectiveness in combat.

Warrior Best Profession To Use

The best profession for warrior class will be between Engineering and Blacksmithing, if you don’t care about making money/gold then we think Engineering provides more in terms of PVP and PVE content options. Blacksmithing can make a decent amount of money depending on your server, however, it is one of the more difficult profession to level up. Either way, though you will want to pair the Mining Profession with either of these since they both will require large amounts or Ore to craft the various gear and items recipes.