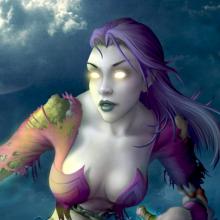 Death offered no escape for the scores of humans killed during the Lich King’s campaign to scour the living from Lordaeron. Instead, the kingdom’s fallen were risen into undeath as Scourge minions and forced to wage an unholy war against everything… and everyone… that they once held dear.

When the Lich King’s grasp on his vast armies faltered after the Third War, a contingent of undead broke free of their master’s iron will. This freedom seemed like a blessing, but the former humans were soon tormented by memories of the horrors they had committed as mindless Scourge. Those who did not descend into madness faced a chilling realization: the entirety of Azeroth sought their destruction.

In their darkest hour, the renegade undead were rallied by Sylvanas Windrunner, former Ranger-General of Quel’thalas, who had also regained her freedom from the Lich King. Under their new queen’s guidance, the independent undead—known as Forsaken—established the Undercity beneath the ruins of Lordaeron.

To further her own goals and protect her budding nation, Sylvanas set out to forge alliances. Chief among these were the tauren of Thunder Bluff, who saw the potential for redemption in the Forsaken. Thus, the tauren convinced then-Warchief Thrall to forge an alliance of convenience between the Forsaken and the Horde. The Forsaken assisted the Horde with a massive offensive against the Lich King and exacted vengeance upon their hated enemy.

The victory came at great cost; Grand Apothecary Putress betrayed the Forsaken, unleashing a new plague that decimated friend and foe alike, while the dreadlord Varimathras seized the Undercity in a coup that nearly killed Sylvanas. The usurpers were eventually slain and the Forsaken capital was restored, but the debacle created suspicion among the Horde regarding Sylvanas’ ability to lead and ensure the loyalty of the Forsaken.

Yet the Forsaken’s allegiance was proven anew when Sylvanas aided the Horde in freeing Orgrimmar from the control of Warchief Garrosh Hellscream, who sought to enslave the other races under orcish supremacy. Now, these free-willed undead fortify their holdings around the Undercity as they ready themselves for the deadly future they believe is inevitable.

Once the heart of Lordaeron, Tirisfal Glades was a land of beautiful rolling hills and golden pastures. When the human kingdom fell to the undead Scourge, this verdant region was transformed into a plagued wasteland, barely able to sustain the dwindling remnants of life that still existed.