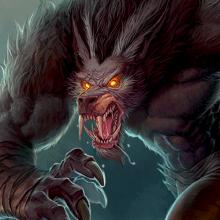 Behind the formidable Greymane Wall, a terrible curse transformed some of the stalwart citizens of the isolated kingdom of Gilneas into nightmarish lupine beasts known as worgen. Human scholars intensely debated the origins of the curse, until it was revealed that the original worgen were not—as previously believed—nightmares from another dimension, but cursed night elf druids.

Long ago, amid a brutal war between the night elves and the demonic satyrs in Kalimdor, a group of druids practiced the ability to transform into a powerful yet unwieldy form that embodied the fury of the wolf Ancient, Goldrinn. Taught by Ralaar Fangfire, these Druids of the Pack sought to use the Scythe of Elune, a mystical artifact, to temper the uncontrollable rage inherent in their chosen form.

Rather than abate the druids’ fury, however, the Scythe transformed Ralaar and his followers into worgen: bestial humanoids enslaved by their own primal instincts.

Ralaar’s druids tore through friend and foe alike. Night elves wounded by the beasts contracted a virulent curse that turned them into worgen as well. Desperate to staunch the affliction’s spread, Archdruid Malfurion Stormrage banished the worgen to a part of the Emerald Dream—Azeroth’s spirit world—where they would be in peaceful slumber for all eternity.

The worgen threat was contained for millennia, until Archmage Arugal pulled the wolf-beasts from the Dream. Summoned by order of King Genn Greymane, the worgen battled Scourge forces encroaching on the kingdom of Gilneas. Yet the feral creatures soon spread their curse throughout the human population, infecting Gilnean soldiers stationed beyond the Greymane Wall.

The night elves, feeling responsible for the creation of the curse and the destruction it caused, agreed to help the Gilneans. With the Scythe of Elune, the night elves could not permanently cure the affliction, but managed to teach the Gilneans how to control their curse; shapeshifting at will from human to worgen, and back again. Now, these self-disciplined worgen have rejoined the Alliance as powerful allies, prepared to fight to keep their humanity and their place in society.

For many years, the nation of Gilneas existed in isolation behind the colossal Greymane Wall. Free from outside influence, the kingdom relied on the indomitable spirit and tenacity of its citizens to make its own destiny in the world. Of late, however, a series of events has shaken Gilneas to its core. While the nation struggles to recover from a past civil war, a devastating worgen curse has spread throughout Gilneas, turning some of its inhabitants into ferocious beasts.