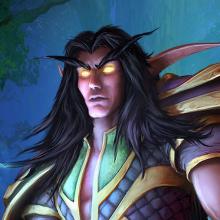 The ancient and reclusive night elves have played a pivotal role in shaping Azeroth’s fate. The night elves of today still remember the War of the Ancients over ten thousand years ago, when they halted the Burning Legion’s first invasion of Azeroth. When the Legion’s remnants rallied together with the vile satyrs centuries later, the night elves again opposed the threat, ultimately vanquishing the forces that set out to wreak havoc on their world.

The Legion’s emergence had forever changed night elven society. Under the leadership of Tyrande Whisperwind and Malfurion Stormrage, they cultivated a peaceful civilization, and shunned the use of arcane magic, which had attracted the Legion to Azeroth.

But the night elves’ tranquility was shattered anew when the Legion and its terrifying undead Scourge launched a new invasion of Azeroth in the modern times--a conflict known as the Third War. The Night Elves fought alongside the Horde and Alliance to defeat the Legion, but their victory was only made possible through an explosion that damaged the blessed World Tree, which had long granted the night elves immortality and protection from aging and disease.

Although the night elves still struggle to cope with the loss of immortality, the fate of Azeroth rests on their resilience and willingness to aid other races; qualities which the Burning Legion will surely test again.

The loss of the first World Tree, Nordrassil, during the Third War ushered in a new era in night elven history—one in which this venerable race would no longer be immune to aging, disease, and frailty. As the night elves struggled to cope with their fate, Fandral Staghelm and a group of like-minded druids conspired to create a new World Tree that would restore the night elves’ cherished immortality. Through these druids’ efforts, Teldrassil was planted off the coast of northern Kalimdor, and the bulk of night elven society took up residence atop the new World Tree’s mighty boughs.

Teldrassil, however, was not blessed by the Dragon Aspects as Nordrassil had been, and thus the new World Tree did not change the fact that the night elves were mortal. Even worse, the World Tree and its inhabitants began to manifest signs of an unnatural ailment, later revealed to have been caused by the Emerald Nightmare. Much to the night elves’ dismay, it was discovered that Fandral had fallen to the Nightmare’s influence and had allowed Teldrassil’s corruption to take hold. Ultimately, Fandral’s wayward schemes were thwarted by the powerful archdruid Malfurion Stormrage, and Teldrassil was cleansed. To punctuate the victory over the Nightmare, the Dragon Aspects Alexstrasza and Ysera blessed the tree to ensure its vitality in the years to come. Yet as great and noble as this blessing was, it did not restore the night elves’ immortality.

Of late, Teldrassil’s recovery has slowed, and signs of the Nightmare’s corruption have resurfaced. Already burdened by political tension and the vast destruction unleashed by the Cataclysm, the night elves must now ascertain the cause of their beloved World Tree’s ailment and refocus their efforts on the dire situation facing Azeroth.