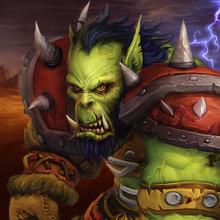 Unlike the other races of the Horde, orcs are not native to Azeroth. Initially, they lived as shamanic clans on the lush world of Draenor. They abandoned their peaceful culture when Kil’jaeden, a demon lord of the Burning Legion, corrupted the orcs and used them in his vengeful plot against the draenei, who were exiles from Kil’jaeden’s homeworld.

Kil’jaeden’s plan worked. The orcs drank the blood of Mannoroth—a prominent Burning Legion general—infusing them with power and enslaving them to the Legion. Exposure to fel energies turned their naturally brown skin into a sickly green. Under the demon’s influence, the orcs killed off most of the draenei population, but Kil’jaeden would not stop there.

With the orcs at their disposal, the Burning Legion planned to invade Azeroth once again. To this end, the corrupted human archmage Medivh conspired with the orc warlock Gul’dan to build the Dark Portal, a massive structure that would allow the orcs passage to Azeroth.

Arriving in Azeroth, the seemingly unstoppable orc armies, known as the Horde, crushed the human kingdom of Stormwind. Eventually, however, the humans made a last stand and were able to defeat the Horde and enslave most of the survivors. But a young slave named Thrall, together with Warchief Orgrim Doomhammer, fought to free the captive orcs. Orgrim died in battle, and the title of warchief, as well as Orgrim’s weapon, the Doomhammer, was passed onto Thrall. Thrall led his people to Kalimdor, where his friend and mentor, Grommash Hellscream, gave his life to defeat Mannoroth and forever free the orcs from the Legion’s control.

Years later, Thrall returned to Draenor, now known as Outland, to once again stop the Legion. There, he convinced Garrosh, son of Grommash Hellscream, to join the Horde. Thrall believed that Garrosh would be a clear choice for his successor, but the impulsive young Hellscream’s uncontrolled aggression led him to commit heinous acts against the Horde itself. Thrall saw no choice but to overthrow Garrosh and name Vol’jin—troll chieftain of the Darkspear tribe—the new warchief of the Horde. With the memory of Garrosh’s betrayal clear in the minds of the other Horde races, Thrall and the orcs must once again prove they have overcome their old destructive tendencies.

The dry, harsh land of Durotar is home to some of the toughest creatures on Azeroth. Unwary travelers may fall prey to venomous scorpids, ferocious crocolisks, or angry quilboar. Thrall chose to settle this inhospitable area after the Third War as penance for the orcs’ past transgressions. He named the land after his father, Durotan, former chieftain of the Frostwolf clan. Following the Cataclysm, many of the orcish settlements were flooded or destroyed, and the Northwatch soldiers at Tiragarde Keep have become more aggressive than ever. As relations worsen between the Alliance and the Horde, it is essential that the orcs contain these threats swiftly to ensure the survival of their people.