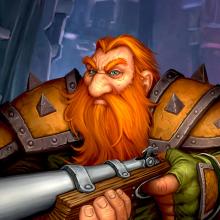 For many years, three dwarven clans—the Bronzebeards, the Wildhammers, and the Dark Irons—lived united in Ironforge under the wise rule of High King Modimus Anvilmar. When Modimus passed away, tensions boiled over among the clans, and war erupted for control of the city. Thus began the War of the Three Hammers, a savage conflict that raged for many years, during which time the Bronzebeard clan won sole ownership of Ironforge, severing relations among the other clans and expelling its rivals.

Recently, however, a twist of fate has drawn the rival clans back to Ironforge after they’ve spent centuries apart….

When freak natural disasters rocked Azeroth just prior to the Cataclysm, dwarven lands were not spared from calamity. A series of quakes tore through areas surrounding Ironforge, reducing settlements to rubble and taking the lives of many innocent dwarves. To glean answers as to the troubling state of the world, King Magni underwent a mystic ritual to commune with the earth. The ceremony, however, had an unexpected effect: Magni was transformed into diamond and became fused to the depths of Ironforge itself.

In the power vacuum that followed, his estranged daughter, Moira, who had married into the despised Dark Iron clan, briefly claimed Ironforge’s throne and effectively locked down the city. If not for the intervention of King Varian Wrynn of Stormwind and his son, Prince Anduin, her actions might have sparked another civil war. With Varian’s guidance, control of Ironforge has since been divided equally among the Bronzebeard, Wildhammer, and Dark Iron clans through the Council of Three Hammers. As the clans put aside their old quarrels and began working together, the council’s ability to govern as one shows promise.

Encircled by jagged mountain peaks, the snowy region of Dun Morogh has been the cultural heart of Ironforge’s dwarves for ages. Not long ago, quakes roused numerous troggs from their subterranean dwellings and drove the bestial creatures toward the dwarven settlement of Anvilmar in Coldridge Valley. The sudden influx of troggs also caused the savage Frostmane trolls to abandon their usual holdings on Shimmer Ridge and encroach upon dwarf-occupied areas. Threatened on two fronts, Dun Morogh’s mountaineers are spread thin. Without additional assistance, the prized lands of Dun Morogh might soon fall to the dwarves’ barbarous foes.