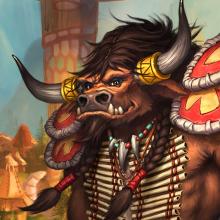 The peaceful tauren—known in their own tongue as the shu’halo—have long dwelled in Kalimdor, striving to preserve the balance of nature at the behest of their goddess, the Earth Mother. Until recently, the tauren lived as nomads scattered throughout the Barrens, hunting the great kodo beasts native to the arid region.

During the Third War, the mighty tauren chieftain Cairne Bloodhoof had a chance encounter with the orcish Horde that explored Kalimdor. After befriending Warchief Thrall, Cairne and his tribe were able to fend off their enemies while they made a new home in Mulgore; the city of Thunder Bluff. Owing a debt to the orcs for their assistance, the tauren joined Thrall on Mount Hyjal to defend Kalimdor from the demons of the Burning Legion.

For years the tauren flourished throughout Mulgore, but tragedy befell them following the campaign against the Lich King in Northrend. Believing that the reckless new warchief, Garrosh Hellscream, would lead the Horde to ruin, Cairne challenged the young orc to a duel. The tauren chieftain clearly had the upper hand...

However, unbeknownst to either of the duel’s combatants, Magatha Grimtotem, a tauren matriarch who harbored great contempt for Cairne, had poisoned Garrosh’s blade. The poison paralyzed Cairne, and Garrosh was able to slay him.

Magatha’s followers then stormed Thunder Bluff in an attempt to seize it. However, Baine, Cairne’s son, managed to launch a counterattack and retake the tauren capital, banishing Magatha and her followers from tauren lands. Despite the deadly encounter between Cairne and Garrosh, the tauren have not abandoned the Horde. Baine bravely took up the mantle of tauren leadership, and the Highmountain tauren have established a foothold on the growing Legion corruption near the Broken Isles.

After settling in the grasslands of Mulgore, the mighty tauren established the stunning capital of Thunder Bluff. For years afterward the tauren lived amid central Kalimdor’s serene plains, tending to the well-being of their beloved new home. Yet the recent Cataclysm has had disastrous effects on Mulgore. Driven from their dens south of Thunder Bluff, the barbaric quilboar have swarmed across Red Cloud Mesa, encroaching on Camp Narache. Apart from taking numerous tauren captive, the quilboar have caused giant thorned roots to burst from the ground, choking all life from the once-verdant plains. In light of this, the tauren have vowed to drive away the savage creatures and heal the wounds inflicted upon the land before the damage becomes irreparable.