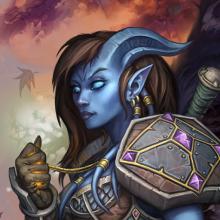 Long before the fallen titan Sargeras unleashed the Legion on Azeroth, he conquered the world of Argus and its inhabitants, the eredar. Believing that this gifted race would be crucial in his quest to undo all of creation, Sargeras contacted the eredar’s leaders – Kil’jaeden, Archimonde, and Velen, offering them knowledge and power in exchange for their loyalty.

Only Velen abstained, for he had seen a vision. In it, his people were transformed into demons; members of Sargeras’ Burning Legion, a growing army of unspeakable evil. With the aid of the benevolent naaru, Velen gathered like-minded eredar and escaped Argus. These renegades would call themselves the draenei, or “exiled ones.”

Kil’jaeden, infuriated by the draenei’s flight from Argus and their refusal of Sargeras’ offer, led the Legion’s armies in pursuit of his former people throughout the cosmos. But the draenei eluded their hunters, discovering sanctuary on a remote world that they would name Draenor. There, the draenei developed an extraordinary society and coexisted peacefully with the shamanistic orcs native to the planet Draenor.

Kil’jaeden eventually found Draenor and corrupted the noble orcs into a single, bloodthirsty force: the Horde. Blinded by rage, the Horde slaughtered most of the draenei race and forced any survivors into hiding. After being exposed to fel energies wielded by orc warlocks, many draenei were mutated into physically deteriorated forms known as the Krokul, or “Broken,”. Years later, the shaman Ner’zhul opened magical portals throughout Draenor, and the resulting energies shattered the dying world.

What remained of Draenor—henceforth known as Outland—devolved into a battleground among the Burning Legion and other factions vying for control of the ruined landscape. To escape the chaos, Velen and a number of his followers commandeered a dimensional fortressnamed the Exodar. In search of new allies, the draenei left Outland.

However, the blood elves had sabotaged the Exodar’s engines, and the draenei ultimately crash-landed on the world of Azeroth, where they pledged their loyalty to the Alliance. Together with their new allies, Velen and his refugees returned to Outland and defeated their demonic rivals. But Velen had another vision: a coming war between the forces of light and darkness. The draenei now prepare to defend their new home, Azeroth, against a shadow they believe is fast approaching.

Located off of the coast of northern Kalimdor, Azuremyst Isle is home to the draenei, refugees who fled Outland aboard the massive dimensional vessel named the Exodar. When the draenei crashed on Azeroth, powerful crystals from their vessel were scattered about Azuremyst Isle, mutating flora and fauna near the debris. Following the ill-fated landing, the draenei worked feverishly to find survivors and mend any damages inflicted on the isle due to their disastrous arrival. The draenei have since taken to the isle and established the remains of the Exodar as their base of power. Having suffered a long and arduous history of exile, the draenei are now resolved to give their lives in defense of Azuremyst Isle.